Cause Or Correlation? Debunking The Myths Behind Blackouts And Cognition

A blackout is an alcohol- or drug-induced memory loss caused by overconsumption. Blacking out from drinking specifically, however, is typically linked to binge drinking which is diagnosed as when a person’s blood alcohol content (BAC) exceeds 0.15.

However, experiencing a blackout doesn’t mean complete unconsciousness. Rather, consciousness remains fairly intact as the person continues to go about his or her interactions and activities albeit intoxicated. Hence, their sense of judgment would be skewed or questionable at best. In fact, people undergoing a blackout level of drunkenness are at a higher risk of injuring themselves.

Whilst in their blackout state, people can continue to carry out their daily activities and livelihoods with no problem. The only exception is their brain’s inability to transfer those experiences into memory until they sober up. It can get dangerous, and it is crucial to live a new life and stop alcohol use disorder instead.

Inevitably, should you drink way beyond your tolerance and past your tipping point, the ultimate repercussion of blackout would be fainting. This is the worst-case scenario because you could potentially lead to choking on vomit, suffering head trauma from falling over, or even alcohol poisoning. There have also been instances of people suffering from alcohol-induced seizures due to the high level of toxins in their bodies. All of these consequences are not only undesirable but an immediate call for medical attention as it could a matter of life and death if the alcohol persists to poison the system.


Alternatively, some people might experience “brownouts” as well. This occurs when a person only fails to remember some events, not all events. They might be able to recall their memory if prompted by a conversational or environmental trigger. Thus, it could be considered as a milder, preliminary stage to blackout.

Is Blackout a Symptom of Alcoholism?

Emergent studies have revealed that our brains are more susceptible to blackouts from substances such as alcohol and drugs compared to others. This could be accrued to the fact that alcohol inhibits neural pathways facilitating the transfer of memories from temporary to long-term memory. Thus, when people over-drink, it might result in memory loss or temporary amnesia. As a result, persistent over-consumption of alcohol can lead to brain and organ damage over time. However, it should be noted that there hasn’t been any particular link associated between blackouts and cognitive deficits, but rather alcohol itself. Blackouts only serve as the symptom, not the cause. Hence, correlation is not causation.

This could be a major concern for those with weaker tolerances to alcohol or more specifically, those with a weaker vulnerability to memory inhibition. It’s estimated around 40 percent of the population is prone to suffering blackouts during binge drinking. While blackouts aren’t necessarily a definite indicator of alcoholism, it is a possibility.

Lastly, having a higher alcohol tolerance doesn’t protect you from blackouts. In fact, it predisposes the individual to be at greater risk of alcohol poisoning since their threshold is higher. This suggests that their limit pushes closer to the life-threatening quantity constituting alcohol poisoning at a BAC of 0.3.

While the onset, range and intensity of symptoms varies depending on the alcohol concentration in one’s body, here is a rough guide of the expected symptoms at each stage of drinking.

Between four to six drinks, the onset of alcohol-induced grogginess begins to set in. Our senses are dulled and our inhibitions are weakened. Our executive functioning becomes slower in terms of judgment and decision-making. However, memory still remains relatively intact.

Between eight to twelve drinks, reaction times are noticeably slower accompanied with slurred speech. At this stage, vision might be affected too in terms of double vision or vision blurriness. For most drinkers, they’d probably wake up hungover the next morning. However, should they push beyond ten drinks, coordination becomes seriously impaired, presenting the individual at greater risk to physical injuries and accidents. More adverse reactions to alcohol at this point could include nausea, vomiting, diarrhea and indigestion as the liver and kidneys work doubly hard to process and break down the alcohol circulating the bloodstream.

Beyond twelve drinks and you’re asking for alcohol poisoning.

Once again, susceptibility to blackouts and alcohol poisoning is extremely subjective, varying according to tolerance levels. The liver can only process one unit of alcohol per hour. Anywhere near a BAC of 0.08, it is illegal to drive.

Now, it begs the question: which population demographic is more prone to blackouts? Biologically, women have a higher body fat ratio and less water-to-body-mass than men. As a result, their alcohol tolerances are lower, making it easier to be intoxicated under less alcohol. This naturally poses women at a greater risk to blackouts if they exceed their already-lower tolerance.

Smokers are also more prone to suffering alcohol-induced blackouts. Although the correlation isn’t distinct, it’s believed that smoking as a pre-existing underlying health condition or propensity to addictive behaviors are all factors increasing the risks. 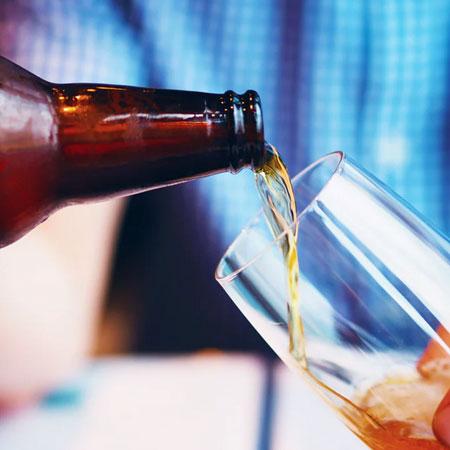 Temporary or Permanent Effects of Blackouts?

In the short run, frequent blackouts could increase an individual’s vulnerability to mental health issues such as depression or trauma. Additionally, due to weakened executive functions, people are more prone to making rash and illogical decisions which could cause serious legal or financial problems.

In the long run, brain damage is arguably in the books but not because of blackouts. Excessive alcohol is the sole reason for incurring brain damage. This leads to significant memory loss and by extension, greater difficulties in forming new ones.

While blackouts are no trivial matter, occasional blackouts are not a cause for concern. Only if they occur frequently enough, do they begin posing as a significant warning sign for something graver and more severe affecting your body? If it worsens to this state, only then could the blackouts be associated with alcohol use disorder in which the individual has become incapable of controlling their alcoholic consumption. They have lost all self-discipline and restraint over their drinking habits and subject their body to greater risks of alcohol poisoning as they continually push their alcohol limits.

In such scenarios, third-party interference is needed to mediate the issue as they become a risk to both others and themselves. At worst, they could end up losing their life from alcohol poisoning — all because they couldn’t control themselves over a pint of beer… or twelve.