How to save energy with colour

We know that white reflects light and black absorbs it, yet we continue to add a roof onto our home that is black or brown and absorbs the most heat.

Compared to most re-roofing alternatives, a white roof system provides an efficient, high-quality solution at a fraction of the cost. Why aren't we painting our roof white. Perhaps this is another lesson we can learn from the Ancient Greeks! 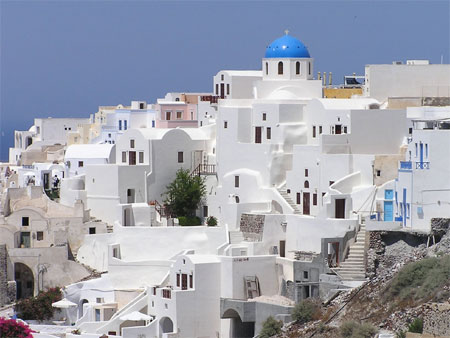 A white roof reduces indoor temperature, which results in a reduction in electricity consumption and thereby reduces carbon footprint. 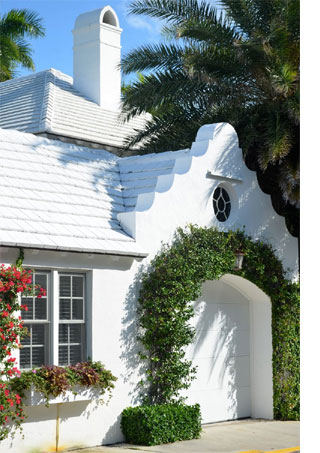 But does a light-coloured roof really curb carbon emissions and combat global climate change? The idea is not a new one, it has been around for while, but a recent study by researchers at Lawrence Berkeley National Laboratory has found that implementing cool roofs in cities around the world can not only help cities stay cooler, but can also cool the world.

Because white roofs reflect far more UV radiation than black, buildings with white roofs will stay cooler. If the building is
air-conditioned, less air-conditioning will be required, thus saving energy. 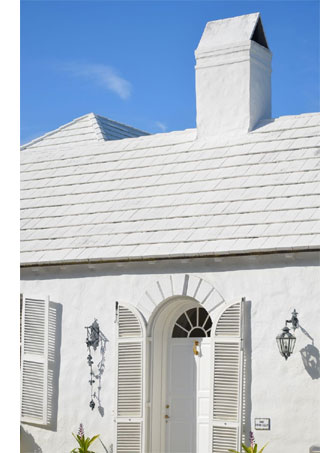 Even if there is no air-conditioning, the heat absorbed by a black roof heats the space below, making the space less comfortable. It's also carried into the city air by wind - raising the ambient temperature in what is known as the urban heat island effect. In the latest study, the researchers used a detailed global land surface model from Nasa that contained regional information on surface variables such as topography, evaporation, radiation and temperature, as well as on cloud cover.

For the northern hemisphere summer, they found that increasing the reflectivity of roof and pavement materials in
cities with a population greater than 1 million would achieve a one-time offset of 57 gigatons (1 gigaton equals 1 billion metric tons) of CO2 emissions (31 Gt from roofs and 26 Gt from pavements). That's double the worldwide CO2 emissions in 2006 of 28 gigatons.

"If we assume that roofs have a service life of 20 years, we can think of an equivalent annual rate of 1,2 Gt per year. That offsets the emissions of roughly 300 million cars (about all the cars in the world) for 20 years!" stated Berkeley physicist Art Rosenfield. [ popularmechanics.co.za ]

Even corporate South Africa is taking note and making a difference. In their journey towards carbon-neutral status, Vital Health Foods has joined the ranks of Meerlust Winery, KWV, South African Breweries, Coca-Cola, Distell and Spoornet by painting the roof of their head office and pharmaceutical-quality production facility with Thermoshield. Since painting the roof, Vital Health Foods has reduced their electricity usage, which in turn reduces the burden on the environment.

Thermoshield Coating is a unique insulating coating that reduces inside temperatures by 45% and reduces air-conditioning costs by half. Unlike other insulation methods that allow heat to penetrate the roof, Thermoshield reflects the heat from the roof thus preventing heat from penetrating the building. Thermoshield Coating contains microscopic ceramic beads based on the same technology NASA used in the ceramic heat barrier tiles of the Space Shuttle. When applied the ceramic beads in Thermoshield form a heat barrier coating that forms a dead airspace on the surface of the roof. This is so effective that it reflects heat off the roof.

But, and of course there has to be a but

Stanford University has now released a study that refutes the previous study by Berkeley by stating that most of the early white roof studies simply looked at the change in radiative forcing and figured that less absorbed sunlight equals lower temperatures. “None of these studies had ever looked at the climate feedback effects, how clouds and pollutants would be affected,” he says. And he found that white roofs tend to decrease cloud cover — which, in turn, makes the world warmer.

Stanford’s research found that white roofs would, in fact, cool urban surfaces. But by cooling that surface air, the roofs increase overall air stability, which prevents moisture from travelling upward to form clouds. Fewer clouds means that a greater share of sunlight ends up hitting the Earth’s surface, which means hotter overall temperatures.

And so the debate continues. One theory holds that white roofs would reduce the amount of heat that buildings absorb in the summer, thereby curbing the need for air conditioning. But another recent study by the National Center for Atmospheric Research found that this could potentially get offset by the need for greater heating in the winter.

If white roofs are more complicated than expected, then what about all those other proposed schemes to artificially cool the planet? [ washingtonpost.com ]

And the bottom line

Do we wait for the research or take action now? I personally cannot see everyone rushing out to buy white insulating paint for their roof but there are going to be some that will and have already done so.

It's a catch-22 situation or like being stuck between a rock and a hard place. It might be good for our planet, but then again it might not.