Moissanite looks like diamond so much that it requires a special tester to differentiate between the two, making moissanite a very desirable diamond alternative. 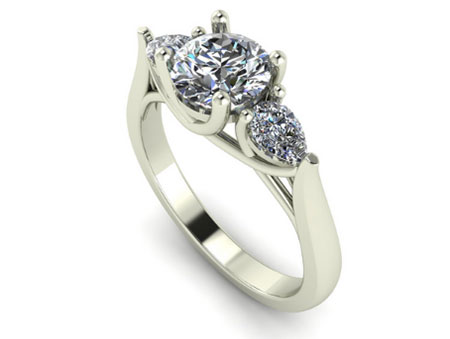 If you are in the market for an engagement ring, you have probably heard of moissanite. It is the latest diamond simulant to take the jewelry world by storm and for good reason. It is harder than Sapphire and more brilliant than diamond. But the kicker is the price. In larger stones, moissanite can cost 30-70% less for a comparable natural earth mined diamond. It also is more environmentally friendly than even lab diamonds, which is a huge draw to today’s younger and more socially conscious consumer.

Moissanite is a diamond simulant made from silicon carbide. A diamond simulant is a stone that looks like a diamond, but is not a real diamond. Moissanite looks so much like diamond that it requires a special tester to differentiate between the two, making moissanite a very desirable diamond alternative. Before moisasnite, CZ was the most common diamond simulant, but it has issues. It isn’t very hard as the color will fade over time.

Moissanite was first discovered in a meteor crater in 1893 by scientist Henri Moissan. He mistakenly believed the crystals he found were diamonds. Naturally occurring moissanite is extremely rare. Because of this, almost all of the moissanite for sale is lab grown. It can take 2-3 months to create a single moissanite stone in a lab.

While moissanite looks a lot like diamonds, they have many key differences. Moissanite weighs much less than diamond. It is 15% lighter, to be precise. Because of this, moissanite is usually sold by size in millimeters rather than carat weight. So, rather than a 1 carat round, you would get a 6.5mm round. Moissanite is also priced based on different standards than diamond. All Moissanite is at least VS in clarity, so that isn’t a factor. The differences lie in the color. They have stones in the near color ranges of JK, GH, and colorless. Another thing to consider is where they are purchased from as cheaper stones won’t have the same quality of cut that a more expensive stone might have.

Diamonds are slightly harder than moissanite. Moissanite ranks 9.25 on the Mohs scale, while diamonds rank 10 on the Mohs scale. Sapphire is a 9. While diamonds are a little harder, moissanite has more fire and brilliance. Moissanite has a refractive index (RI) of 2.65, while diamond has a refractive index of 2.42. The RI is the stone’s ability to bend light, which is what causes the rainbow color effect in a diamond’s sparkle. Moissanite’s fire is rated at 0.104, while the fire of a diamond is rated at 0.044. That is a pretty big difference.

Moissanite is much less expensive than diamonds. Moissanite can be about $400 to $900 per carat while a one carat diamond can be anywhere from $2,000 to $20,000. However, the resale value of a diamond is going to be far higher than for a moissanite. Not that you will be selling your ring any time, soon, but it is true that women like to upgrade their rings after a few years of marriage bliss!

All of that said, at Valeria Custom Jewelry, we specialize in creating Custom Moissanite Engagement Rings at prices that won’t bust your budget. Browse our selection of custom engagement rings for inspiration or send us your idea for an engagement ring that you can’t find at the retail stores. Why settle for cookie cutter designs worn by thousands of people when you can have something made just for you that shows your style and personality?

We have a unique creation process where you can be as involved as you want to be. And we never cast anything until the design has been approved. So you will always get the engagement ring you want. And many times, we can do it for less than a comparable ring at one of the big box stores.