How clean is tap water?

After hearing rumours, stories and goings-on about our water supply, and the purity thereof, I decided that it was time to take a closer look at the situation. There is always someone I know complaining of stomach ailments, and this got me thinking about whether our drinking water is as pure as it is supposed to be. My parents have been using a water purification system in their home for quite a while and I decided to take a look at the options and the difference between using a water filter and a water purification system.

First off... there is no comparison between the two. A water filter is simply that. It filters large particulates from the water. So if you are worried about worms in the water*, lime scale and chlorine, then this is all you need. A water purification system is a 7-stage purifier that removes metals, bacteria, small and large particulates, chlorine and the like - in fact it removes between 95 and 98 percent of everything that shouldn't be in the water and guarantees crystal clear drinking water.

Based on my research, I decided to install a water purification system at home. The system was installed in under an hour - no mess or fuss - and after flushing the system a couple of times we now have crystal clear purified water on tap. But there is more to the story... 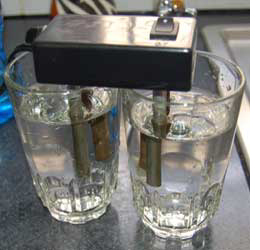 The next step was to simulate or speed up the corrosion process of metals and elements in the water. 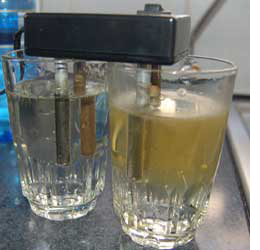 BELOW: The results are immediate. The glass on the right contains normal tap water. 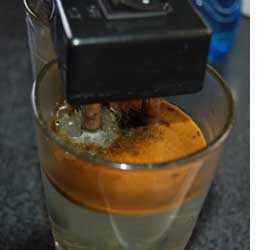 ABOVE: After a total of five minutes there is a distinct difference between the two glasses of water.

The purified water still remains clear - the tap water is coated with a layer of scum.

This is the water that we are drinking!

Installing a water purification system in the home guarantees that you and your family don't drink water that is infested, or contains an overdose or chlorine, flouride, or whatever else they decide to put in - or leave in - the water.

*A couple of years ago it was reported in the news that residents in East London found small mysterious worms in their water. Turned out the municipality confirmed that the drinking water was safe according to their tests, but omitted to mention that they didn't test for worms!