Rustic Homes, forerunner of timber home design and construction in South Africa and leader in the field since the 1980s, has recently undergone a change of ownership. Werner Slabbert, timber construction industry stalwart, will carry the company torch well into the future, building on the enduring Rustic Homes legacy. 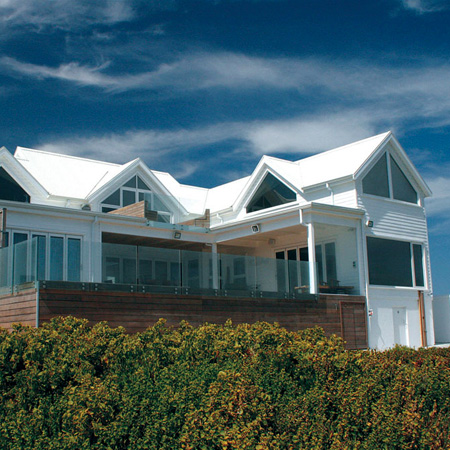 Since its inception in the 1980s, the Rustic Homes brand has embodied solid, high quality timber construction for the discerning homeowner. Underpinned by superior building materials, meticulous attention to detail and painstakingly honed craftsmanship, every Rustic Home supports the company’s reputation for delivering timber homes that are set well apart from those of its competitors. With a change of hands at the end of 2016, Rustic Homes is now under ownership of timber construction industry leader, Werner Slabbert.

Slabbert, whose holiday home construction fell into the hands of unscrupulous timber frame builders, prompting his career change from broadcast engineering to timber frame building, is deeply passionate about his trade. "When I realised that the builders had disappeared and my house would not be built, I took a month’s leave from work and finished the construction of my house with the help of a carpenter," remarks Slabbert. "During this time, I was approached to build another log home, which I was reluctant to do, given my lack of experience at the time. But thanks to my growing reputation for solid building practice and sound business ethics, the orders kept coming in," he says.

Slabbert’s hard-earned experience was complemented by his efforts to educate himself on the subject of timber frame construction. "At the time there wasn’t much going on in South Africa in terms of timber construction, so I read up a lot about how the Australians were building with timber, completed a number of courses with a local timber construction association and spent a great deal of time with the late Victor Booth, a well-respected timber frame engineer, considered a ‘guru’ of his trade in South Africa," says Slabbert. "Given that almost all my early commissions were from people who had been defrauded by unscrupulous builders, it was important to me to play my part in elevating the standing of the trade, not only from an ethical perspective, but in the line of good and legally compliant building practices as well," he adds.

Apart from building the successful and well-renowned log home building business, Eco Log Homes, Slabbert has played an active role in promoting timber construction throughout South Africa by contributing his time and expertise to various non-gain projects. "I felt I could use my passion for my trade to make a difference in the sector by promoting timber construction in South Africa. I continue to do this on a voluntary basis, because it is my belief that if an industry is elevated and promoted, all of its constituents will reap the rewards," Slabbert remarks.

Acting as vice chairman of what was known as the Institute for Timber Frame Builders (ITFB) for two years, Slabbert took to the helm of the Institute for another four years, during which time the ITFB merged with the Institute for Timber Construction South Africa (ITC-SA), of which he is still a board member. Slabbert is the chairman of the working group of the SANS (South African National Standards) 10082 document at the South African Bureau of Standards (SABS), lectures on the subject of timber frame construction at various universities and has presented numerous papers on the subject at various conferences.

A Rustic Home is a high-value investment underpinned by the work of master craftsmen using the best available building materials under the guidance of experts in the field of timber construction. "When I started building in 2001, I watched Rustic Homes with a keen eye and aspired to build homes like they did," comments Slabbert. "Every Rustic Homes build is yet another testament to the company’s standard-setting reputation for building homes that last many a lifetime and can withstand the harsh climate of the Cape," he remarks.

Rustic Homes uses a unique and formidable bracing system that goes above and beyond the requirements of current South African building regulations. The end result is that all the walls – including interior walls – are sheathed on both sides and densely packed with insulation, keeping the ambient temperature inside the house moderate, thereby saving tremendously on heating and cooling costs. The system renders the walls even more solid, dense and soundproof than conventional timber frame construction, making Rustic Homes’ method ideal for commercial buildings, like hotels and B&Bs as well as residential construction.

Rustic Homes also uses a space-enhancing system of flitch beam construction, a combination of timber and steel, which affords longer spans without having to increase the depth of the beam. This makes wide open, voluminous spaces a possibility and is also ideal for large door openings. 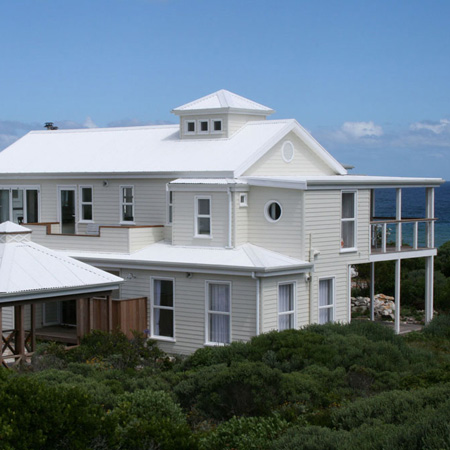 Rustic Homes prides itself on its holistic approach to timber frame building that includes intensive client consultation, in-house design and planning, construction of the client’s home and final handover. Slabbert comments, "It’s so often that a client seeking to have their dream timber home built must liaise with a number of separate participants in the project; from the architect and quantity surveyor to the builder and product suppliers," adding, "But with its impressive track record, extensive experience and uncompromising approach to quality and service, every Rustic Homes client has all of this taken care of and can enjoy watching their dream home become a reality without the usual stress associated with building."

For Rustic Homes, the client’s feedback and input on site is as important as their design brief. "We put tremendous effort into considering the landscape upon which each home will be built, so as to optimise on the views, topography and any number of design possibilities afforded by the site," says Slabbert, adding, "We also regularly meet with the client on site throughout the construction phase, to ensure complete satisfaction throughout and to avoid any possible hitches."

To save on time, fabrication of the timber frame superstructure commences off site in the Rustic Homes factory in the Somerset West area while the house’s foundations are being laid. Once the structure has been transported to site, craftsmen, carpenters, joiners, painters, plumber and electrician commence their trades until each assignment has been completed, checked and signed off by management.

Thorough inspections are conducted throughout the building process, so that at handover, the client can move in, rest assured that their new tailor-built home is of the highest quality and will last a lifetime. 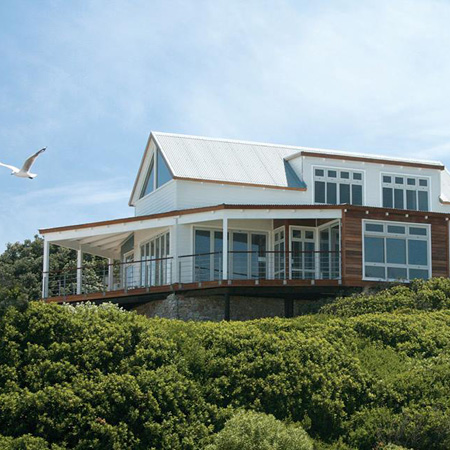 Pieter Silberbauer, past owner of Rustic Homes, comments, "We have grown the Rustic Homes brand over three decades and it is clear to us that Werner recognises the significance of this as he takes over the brand and the responsibility that goes with building and maintaining it. We wish him well as he ensures that every project he undertakes meets the exacting standards of quality that established Rustic Homes as the undisputed leader in timber construction in Southern Africa."

"The Rustic Homes formula has worked for years and continues to work well. The only changes to be made to the running of the business going forward will be in line with keeping abreast of industry trends and regulations, and building material advancements," says Slabbert.

The Rustic Homes story has roots in a young boy’s recollections of time spent at his great-grandmother’s historic timber home in the heart of Knysna. These memories and appreciation of the timber frame home are evidenced not only in the many homes the Rustic Homes team have built over the years, but in the uncompromising quality and workmanship they’ve imprinted on every project. “It is thus a privilege to take the reins of this remarkable company and to be a custodian and purveyor of the Rustic Homes brand and its deep-rooted legacy into the future,” Slabbert concludes.