Pratley stunt not a prank! 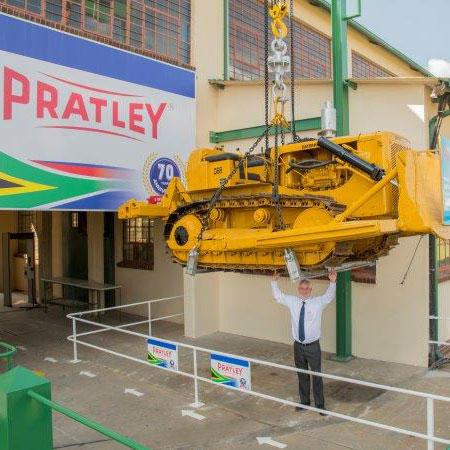 In celebration of its 70th anniversary this year, the Pratley Group will use Friday 13 July as an auspicious occasion to replicate the memorable launch of Pratley Wondafix in 1985. This saw CEO Kim Pratley stand underneath a 13 t bulldozer, hoisted and held aloft by a crane, attached to two plates joined by the unique adhesive. Such is Kim’s confidence in the quality of the product that the company will replicate the death-defying stunt at the Group’s head office in Krugersdorp. “I will still gladly bet my life on the quality of our product,” Kim affirms.

Its 70th anniversary sees the Group stronger than ever, with over 1 000 products in its stable, and 350 global patents. This is testament to its successful diversification strategy over the decades, and developing new products. This year alone the Group has already introduced two new products, with another three in the pipeline. “We are committed to research and development (R&D), and we see our future in our ongoing run of new products. I certainly also hope to see us establish a successful global presence,” Kim comments.

“We supply top solutions to our customers, not only to establish longstanding relationships, but also to ensure we respond to changing market needs,” Kim notes. This has resulted in a wealth of brand loyalty over the last 70 years, attributable in part to the Group’s policy of guaranteeing that its products outperform all competitor products globally.

This is no idle boast, with the formulation of Pratley Putty in the 1960s not only putting the company on the global map, but even in outer space, as the product was used by NASA as an adhesive on the Ranger Moon Module Project in 1967. Pratley Putty has since become a household name, used to repair and secure everything from swimming pools to the hulls of sunken ships.

Kim acknowledges that the Group celebrates its anniversary in an economic environment quite different from when George ‘Monty’ Pratley established the company in 1948. “It is a very challenging environment in which we are operating at present, with notable contraction on the industrial and mining side. However, it is equally challenging for our competitors.”

The Group’s ongoing success is also due to its total control of the manufacturing process. It even runs a mining operation to produce Perlite and Clinoptilolite (zeolite) using proprietary minerals-processing technology. These ores form the basis of a range of highly energy-efficient mineral-based products, for a wide range of applications from ultra-lightweight concrete screeds to thermally insulating plasters, pollution-control, water treatment, swimming pool and pond filtration, and even agriculture.

“in all honesty, given our size – and we are a relatively small group – our contribution to the intellectual property of South African industry is unique,” Kim notes. Another key driver for the Group has been its focus on high external service levels, in order to retain customers and secure their loyalty to its brands and products.

“In order to achieve this in a South African context, we pretty much have had to do everything ourselves. Hence we make every single thing we produce. This even extends to the design of the bottle and the nozzle used for our Superglue, as well as all of the associated tooling,” Kim highlights. The strategy has seen the Group maintain its agility in tough trading conditions, and make it self-reliant in terms of having to deal with other suppliers.

The fact that the Pratley Group has remained a family-owned business is also an important part of its success. Kim's son Andrew joined the Group in 2005 after completing a degree in information technology, while youngest son Charles joined in 2009 upon completing his mechanical engineering degree.

“Corporate culture is under-valued globally, with insufficient attention paid to its impact in financial analysis, for example. This has been one of our defining strengths over the years.” Kim adds that one of his personal highlights as CEO has been the large number of people who began working for the Group, and who have subsequently retired successfully. Staff retention remains high, as does the Group’s considerable investment in attracting top skills.

Looking to the future, Kim stresses that the Group’s strategy is to respond appropriately to volatile market conditions. Being involved in mining means it also needs to be sensitive to the issues surrounding legislation and regulation in this critical industry. “While on the one hand companies cannot be cavalier about taking risks, they cannot grow either if they do not. Managing risk is therefore very important, and means striking a balance between financial responsibility and growth.”

Kim concludes that not only does the Group’s track record speak for itself, but it gives both its customers and its staff a high level of confidence in the future. “Our growth has been bolstered largely by our R&D drive, which consistently produces patented products. Every time we bring out a new product, it is the most exciting moment for me.”