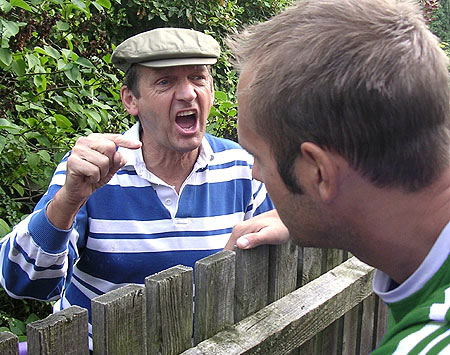 In the early days of this country, land was abundant and neighbours were distant. As the population began to grow and urban areas increased, the courts were called upon to resolve property disputes. At the risk of oversimplification, this doctrine is generally raised when a neighbouring property owner is acting in a manner that can be described as a nuisance.

The Law of Nuisance

Lawsuits invoking the law of nuisance typically involve neighbours suing their neighbours or a public official suing a property owner for the benefit of the general public. By bringing suit, the plaintiff (originator) usually seeks to control or limit the use of the land owned by the defendant (person being sued). The plaintiff is basically saying to the defendant, "Your action is interfering with my enjoyment of my property; therefore, you must stop acting in that manner."

There are two basic types of nuisance suits. These are private and public nuisance actions.

A private nuisance means there has been a loss of the use or enjoyment of property without an actual physical invasion of that property. An example of a private nuisance would be where an individual failed to keep his dog kennel clean, causing the next-door-neighbours to experience unpleasant odours when they left their windows open and also prevented them from spending time in their garden. Another example would be excessive, continuous barking of a neighbour's dogs.

A public nuisance is one that has more far reaching effects. It has the ability to affect the health, safety, welfare, or comfort of the public in general. Examples of a public nuisance would be a factory that emitted bad odours or a pub that produced loud noise.

Nuisances can often be both public and private. For instance, the lights from a sports field may shine directly into the home of a neighbouring property owner, causing a private nuisance. At the same time, the sports field might cause excessive noise and brighten up the rest of the neighbourhood, requiring the homeowners to keep their windows and drapes shut on summer evenings. This would constitute a public nuisance.

No matter what the type of nuisance, the interference with the property must be substantial and continuous. In the above example, an occasional failure to clean out the kennels in a timely manner probably will not be sufficient to require injunctive relief, nor will excessive barking of dogs. Relief that is injunctive in nature generally requires the defendant to take some specific actions to minimize the negative effect of its operations on the plaintiff, from limiting the hours of the action to placing an all out prohibition on the negative action. In constructing its relief, however, most courts will attempt to balance the relative hardships to both of the parties involved in the action. Especially where an ongoing business, as opposed to an individual, is the defendant in the action, the court will try to minimize the economic impact on the business.

In deciding nuisance disputes, several factors influence courts. First, courts will look at the location in which the alleged nuisance is occurring and any applicable zoning restrictions that may apply to that area. For instance, a court may be less likely to place restrictions on a livestock feedlot located in a rural area than on one located at the edge of urban sprawl. On the other hand, no matter how rural, if the feedlot is located in a "residential" zone, a court may be more likely to allow injunctive or other relief. At the same time, the fact that an activity is located in area that is zoned for that type of operation does not mean that it cannot be found to constitute a nuisance. For example, an area may be zoned to allow a mixture of residential and commercial building, and, a court might still find that an "all night" petrol station creates a nuisance for the residential property owners in the area.

There are some other points to consider if you are thinking about bringing a nuisance action. First, a mere fear of future injury will not merit injunctive relief. Further, usually pure aesthetic considerations, such as the "look" of a funeral home in a residential area, will not rise to the level of a nuisance. Finally, where a person specifically purchases property knowing that a given operation is located nearby, the "moving to the nuisance" doctrine will usually prohibit injunctive relief. In this manner, if a person moves into a house located next to a sports field, this doctrine may prohibit the person from seeking relief from the bright lights and noise.

It is not pleasant to be on either side of a nuisance suit. Unpleasant disputes between neighbouring property owners can turn into even more unpleasant and emotionally draining lawsuits. Above all else, our country seems to value the right of people to the peaceful, uninterrupted enjoyment of their property.

If communication fails and action for relief is not taken, the next step would be to contact a lawyer to discuss taking the matter forward.