DataDots and your car insurance

Microdot technology is a groundbreaking innovation in vehicle identification created to solve the problem of identifying stolen or hijacked vehicles... And it looks certain to revolutionise the motor insurance industry. 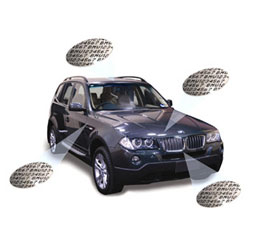 An amendment to the National Road Traffic Regulations was published on 9 March 2012 in Government Gazette 35130.

Business Against Crime South Africa (BACSA) estimates that some 90 000 cars worth R9 billion are stolen or hijacked each year. Although 43% of these vehicles are recovered South Africa's law enforcement agencies are often unable to trace the owners due to identifiers such as vehicle identification (VIN), engine and license numbers being tampered with. As a result some R1 billion worth of recovered vehicles are destroyed each year.

A challenge of this magnitude requires an innovative solution. "Microdot technology came about as a result of many years of collaboration between stakeholders in the industry, including the South African Insurance Association (SAIA) and like-minded business bodies such as BACSA," says Christelle Fourie, Managing Director of MUA Insurance Acceptances. 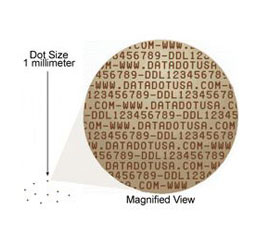 "The technology involves spraying new vehicles with thousands of Microdots, 1 mm in diameter, onto at least 80 different vehicle parts. Each Microdot contains a microscopic 17-digit laser-etched VIN and personal identification number (PIN), which allows for the vehicle to be traced back to the registered owner. The Microdots are only visible under ultra-violet light and through a magnifying lens."

The Microdots can be applied both covertly and overtly, making it difficult for thieves to remove or conceal them, or strip parts of the car for resale. Once the Microdot technology has been applied, the vehicle is fitted with a warning sign which acts as a visual deterrent to would-be criminals. A single dot is all that is required to trace a vehicle owner, whose details are registered on a national database.

Andy Blew, Managing Director: Datadot says the concept has been in South Africa for 10 years and has been applied to approximately one in 10 vehicles on our roads. "At least 60% of all new cars are now Micro-dotted before arriving on the dealer floor - and legislation for all new cars to be Micro-dotted has now been passed," he says.

What impact will Micro-dotting have on the insurance industry? "It is possible that vehicle owners who utilise Microdot technology could benefit from reduced car insurance premiums in the future, as the risk of theft is reduced and the rate of recovery is significantly higher," says Fourie. "The recovery rate of cars that have incorporated Microdot technology is 91% according to a study conducted by BACSA."

Law enforcement remains the bottom line in the fight against crime. "The rapid response of SAPS saw them recovering three cars that we insured in just one week, which is a very encouraging sign for us. Thrilled as we are by this world class response to crime, we believe that we should embrace technologies like Micro-dotting to support their efforts in making South Africa a safer and lower risk society," she says.

Blew agrees that motor vehicle premiums could be reduced as insurers benefit from improved recoveries and fewer thefts with Micro-dotting. Ironically the largest cost savings could accrue to insurers from non-theft benefits. "Theft premiums now only make up approximately 8% of the average motor vehicle premium, down from 18% in 2000," comments Blew.

Insurers should not fixate on the benefits derived from reductions in theft, but on other ways to use Microdot technology in reducing repair costs!" Imagine a claims assessment process that includes lifting a Microdot from the vehicle... A vehicle Micro-dotted at factory level is guaranteed to be the vehicle as portrayed on the Microdot - no more ghost vehicles - no more clones - no more duplications - no more headaches.