From a shabby old farmhouse with Novilon covering the kitchen and bathroom walls and even the toilet; wallpaper on most of the other walls and with either Novilon or green carpet throughout, that house has been transformed into a home where one would be proud to have friends over – not without sweat, tears and quite a lot of money.

Despite the obvious shortcomings, the house suited our needs and was homely and we bought it. The problem was that once the coverings such as the wallpaper were removed, the sins that were they were concealing were revealed, the passageway being no exception. 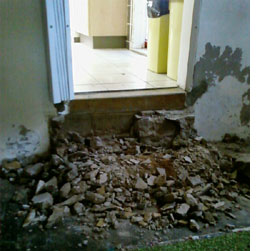 Rising damp on both sides of the walls, cracks and peeling paint from roof leaks over the years, not to mention the taper of the walls; about 200mm from one end to the other. 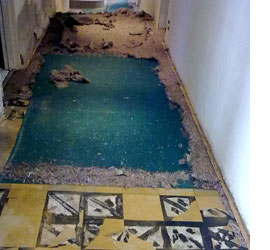 When we decided to tackle the passageway, the taper created the biggest headache. Many hours were spent researching and mulling over the various flooring options available. Tiles could work if laid sideways but did not fit in with the look and feel of the house and were somehow just too run of the mill. The same applied to screed floors. A carpet could be a solution, but did we want to replace one carpet with another?

Not really a fashionable choice for a passageway and over such a large area - about 1 ½ m x 16m – could work out costly. Laminates could perhaps work, but would be noisy, especially with teenagers returning home in the wee hours. Then – inspiration! If we had laminates, we would have to have a rug, so why not lay a border of laminates and have carpet inlays? The taper could then be taken up on the carpet. 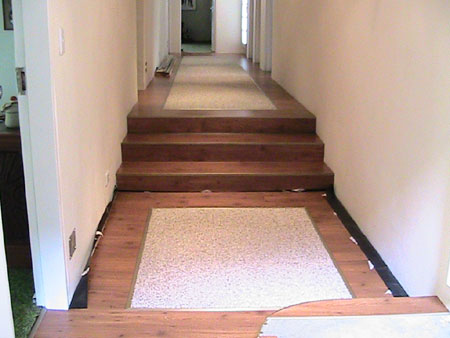 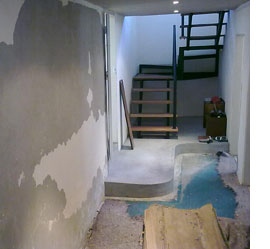 Everything was sketched out on graph paper. But – a stumbling block. We had already removed the dark stone stairway at the end of the passage and replaced it with a wood and metal one which now led onto a new and large curved step and after going from one carpet and laminate fitter to the next, including some at Decorex, only one local installer was willing to tackle the project, not only the step but the job as a whole. The rest said it could not be done – the laminates would shift they said. One even suggested that we make the step square - or lay a carpet instead! Well that wasn’t going to happen. Eventually we decided that we would tackle the job ourselves.

First step was the ceiling. The existing asbestos one was removed and replaced with Isobord. Next came the walls. Flaking paint had to be stripped; cracks filled and the rising damp addressed. 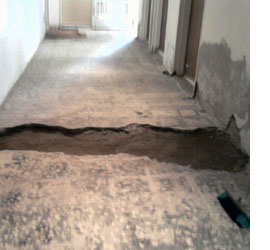 Sections of the bottom part of the walls were powdery and these were broken out and re-plastered and damp-proofed. Then came the lifting of the carpet and underfelt, underneath which was Ozite and then Marley tiles. Only then could we see the condition of the cement – cracked and crumbly in places. Not only that, the stairs in the middle were different sizes. That we already knew. After much deliberation, we got the opinion of 2 builders.

Their advice – the correct fix would be to replace the floor. What started out as a fairly simple renovation was now proving to be a major construction job. Never the less, it would be a waste of money to lay expensive toppings on a weak substrate, so the decision was taken. Break out the floor and stairs, throw a new floor and re-do the stairs. 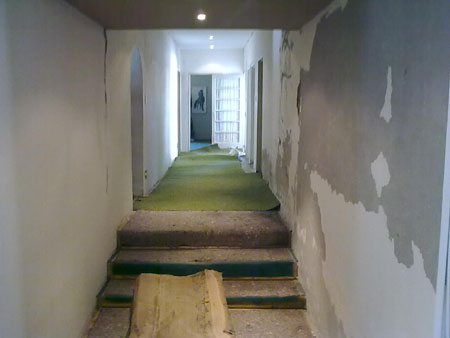 We also had the walls coated with rhinolite as they were so uneven. Only once all that was dry and they walls and ceiling painted could the laying of the floors begin.

We started by hiring a cross-cut machine to cut the laminates to size, a length of 30cm. They were to be laid crossways to hide the taper. We then did a dummy run with the laminates, not having laid them before. 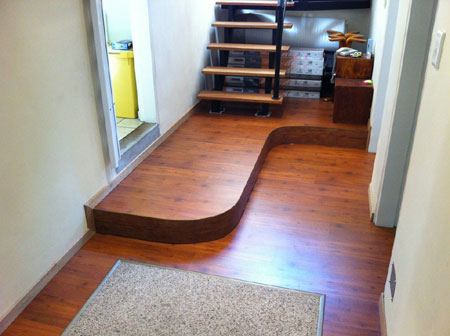 Over the following couple of weekends, the real laying took place. A PVC water inhibitor was laid first, then the foam underlay and then the laminates. The profiles for the carpets were also nailed into place. Laminates were eventually glued onto the curved step after 4 or so failed tests with various glues. To hold everything in place, a varistrip was used and to complete the picture, flexible vinyl strips matched as closely as possible to the laminates along the riser, to accommodate the inner and outer curve of the step.

All that remained was for the carpet fitters to install the inlays. A neutral and washable knotted carpet was chosen to resemble a woolen weave which gives a cottagey look. The result – a unique look which has been dubbed by some as “The best passage in Africa” and which has become a main feature of the house. 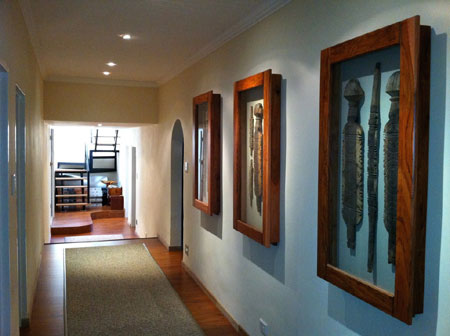