Here's some good news for garden enthusiasts who like to grow their own veggies. Sometime in the future you will be able to grown tomatoes and potatoes on one plant... the TomTato plant. 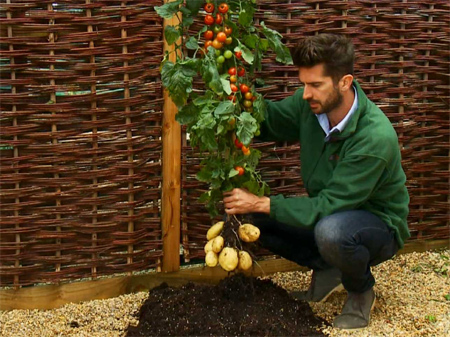 The TomTato plant has been hand-grafted to produce both tomatoes and potatoes. It is not a genetically modified species, but rather the result of hand-grafting these two species of plants together to create an entirely new plant hybrid.

The above ground, or tomato plant, yields up to 500 cherry tomatoes each season, while the below ground plant can yield up to 2kg of potatoes. That's perfect for the home veggie grower who has limited space. And the TomTato produces both tomatoes and potatoes that are ready to be picked and dug up at the same time.

It has taken over 15 years of grafting's to perfect the techniques, which works well since tomatoes are members of the potato family and are therefore naturally compatible.

Every TomTato plant is grafted by hand to create this unique double cropping feature. There's no genetic modification - it's an all-natural, and safe process. From the TomTato plants you can harvest both tomatoes and potatoes - a concept which has been talked about for many years, but this is the first time that plants have been successfully produced.

TomTato plants are sold by Thomson & Morgan in the UK, with growing and aftercare instructions for growing indoors or outdoors in a patio pot or in a vegetable patch. 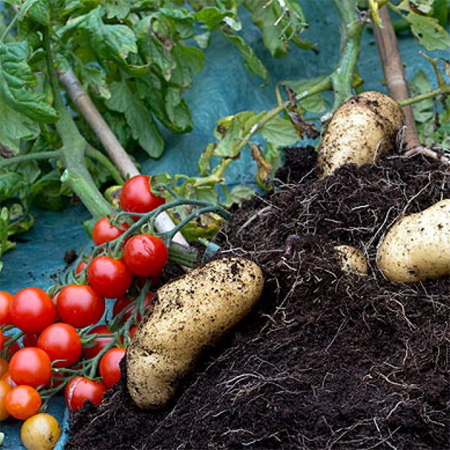 A similar product named "PotatoTom", was launched in garden centres in New Zealand recently. Let's hope we see something similar in SA in the near future. This is an incredible breakthrough and one that any home vegetable grower will appreciate.