How to deal with poor drainage with a French drain

It is important to deal with water pooling or bad drainage in a garden as soon as possible, as left unattended this can lead to serious problems such as damage to building foundations.

While water that pools for several hours after a rain is not a drainage problem, where water stands for two days or more after a rain could definitely be a problem. An easy DIY options that solves bad drainage in a garden in installing agricultural pipe or putting in a French drain. 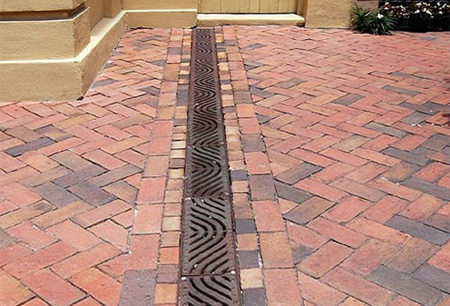 Where a garden slopes, not only can this cause flooding, but also soil erosion. Once again, agricultural pipes or a French drain will drain away or re-direct any water into a drain to prevent future problems.

A French Drain [ shown above ] is a channel that is dug to allow water to drain to a pre-determined spot under controlled conditions. A French drain can be as simple as a trench of about 30cm deep that is filled with gravel. The most effective French drain system is a 3-stage drain that incorporates a perforated or agricultural pipe placed in a trench that is then covered with landscape fabric to prevent blockage. 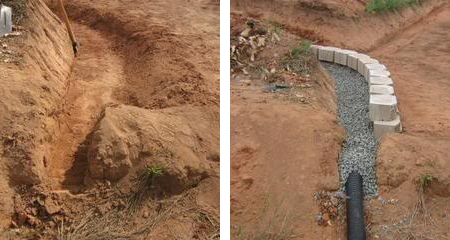 A simple drainage system using a 3-stage drain is fairly affordable and easy to install in a weekend. Most of the work involved will be to dig out the trench for laying the drain system to a suitable outlet point, or into a stormwater drain. 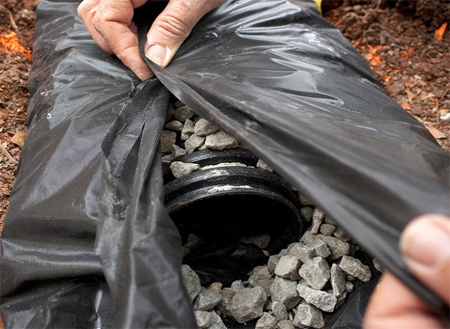 A French drain can re-direct pooling water from one side of a property to another, to allow for drainage off the property into a sewer on the street, or linked to a drain on the property or, as in my case, can be dug deep enough to ensure that excess water drains into the soil. 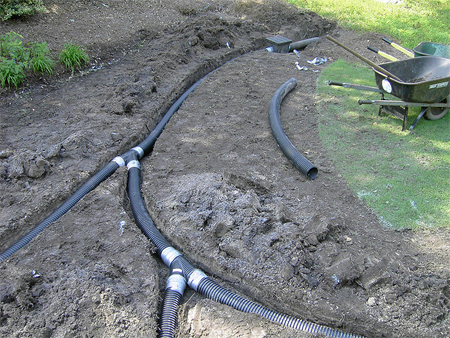 ABOVE: Using a French drain system can drain soggy, wet and saturated soil. The standard drainage system uses porous piping surrounded by gravel to carry water downhill or to a suitable location for discharge. A trench is dug through the area where the water is collecting and a perforated plastic pipe is placed in the trench. Gravel is then poured around the piping material to backfill the trench. Excess water then fills the spaces around the gravel and then moves into the drainage pipe to be carried away.

The length of a French drain is obviously going to be determined by the amount of water you want to re-direct or remove. One side of my property is sectioned off from the other and I installed a French drain along the entire edge of the blocked in section to re-direct water to the open section, where it could follow the slope of the ground without pooling in one spot. I have found that the drain is deep enough that the majority of excess water collected by the French drain simply percolates into the soil.

After digging a trench for the length of perforated pipe, cover the pipe with landscape fabric and then fill in around the trench with gravel before covering with the original material, such as soil and grass. 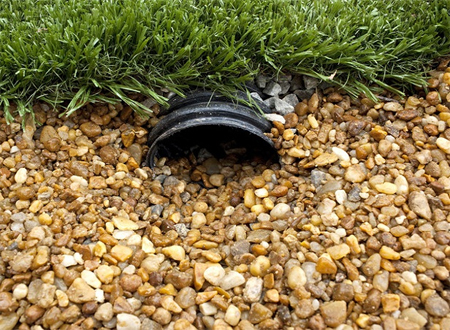 Hi
I read your article and want to bring your attention to statements about laying the drain system to a suitable outlet point, or linking into a sewer line or similar. In Cape Town, and I suspect most places, it is illegal to make such connections to the sewerage system as it can overwhelm the processing plants, or in less severe cases, create unnecessary burden on the plants (which will increase running costs and have other consequences).

It is possible the writer is unsure of her terminology, as she says 'off the property into a sewer on the street, or linked to a sewer drain on the property' – in the former she probably means the storm water drains on the street, but in the latter it would appear that she does intend to mean the sewer line. It is also possible that she is unaware that the two systems are separate.

Either way, you need to correct the article, as you could mislead some people into making illegal connections, with dire consequences for them, and it will not reflect well on your service either.

Note: To avoid any confusion or misintepretation, the article has been corrected to refer to positioning a French drain for drainage into a 'drain' or 'stormwater drain' as opposed to a sewer.