Call it iconic furniture or cultural icons, there is no denying that there have been furniture designers from the late 19th and early 20th century that have taken furniture design to a level that elevates it from everything else that has gone before, or even after, and is still sought after in the 21st century. 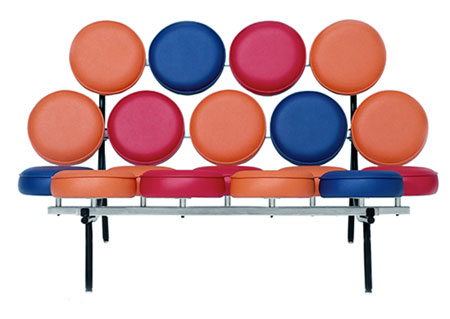 This is a sofa to brighten a room, to be happy and relax on. You look at its "marshmallow" cushions and you can't help but smile. It's been that way since it began turning heads in 1956, when George Nelson's Nelson Marshmallow sofa was described in the Herman Miller catalogue as: "Despite its astonishing appearance, this piece is very comfortable." 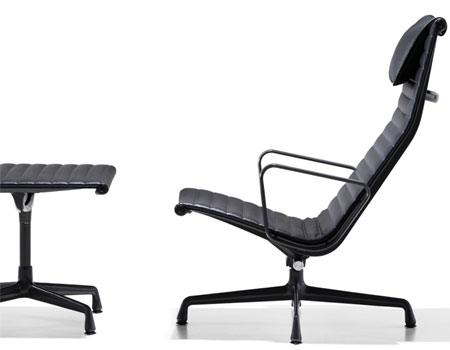 It has been over 60 years since Charles Eames designed his Iconic aluminium chairs, yet these graceful designs are still sought after around the world. The lithe chairs have been a popular design since their introduction back in 1958. And no wonder. The graceful silhouette sits equally well in all kinds of home and workplace interiors. Wherever you place them, these chairs make a statement of enduring design excellence.

The Eames Chaise, designed in 1968, is soft, comfortable, and just 460mm wide. When you lie on it, you naturally fold your arms over your chest. Should you doze off, your arms soon fall to your sides, waking you up. It's a beautiful place to relax for a spell in a study, den, or executive office. 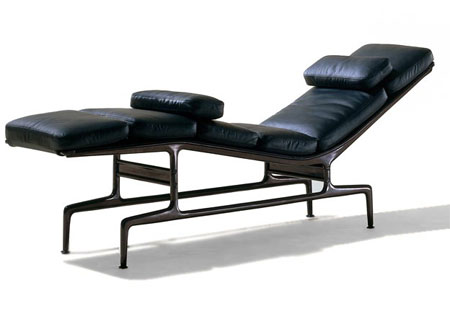 Who doesn't recognize the Eames Chaise and ottoman? These pieces live in museums like MOMA in New York and the Art Institute of Chicago, and in stylish interiors around the world. They have been the subject of documentaries and books. The quintessential modern classic that is still available to discerning furniture addicts around the world. 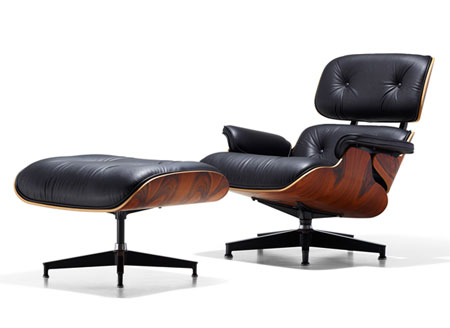 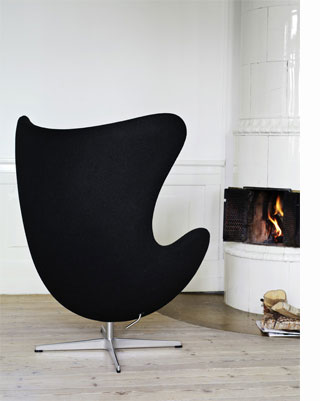 Back in 1958, Arne Jacobsen designed the Egg™ for the lobby and reception areas in the Royal Hotel, in Copenhagen.

The Egg sprang from a new technique, which Jacobsen was the first to use; a strong foam inner shell underneath the upholstery. Like a sculptor, Jacobsen strove to find the perfect shape in clay in his own garage. Because of the unique shape, the Egg guarantees a bit of privacy in otherwise public spaces and the Egg – with or without footstool – is ideal for lounge and waiting areas as well as the home.

Today, the Egg is still available in a wide variety of fabric upholstery as well as leather, always combined with a star shaped base in satin polished aluminium. Another iconic or cultural design icon is Arne Jasobsen's the Ant™. Even older than the Egg, Arne Jacobsen initially designed the Ant™ for a canteen. Today, the Ant is one of the prominent icons of the Arne Jacobsen collection. 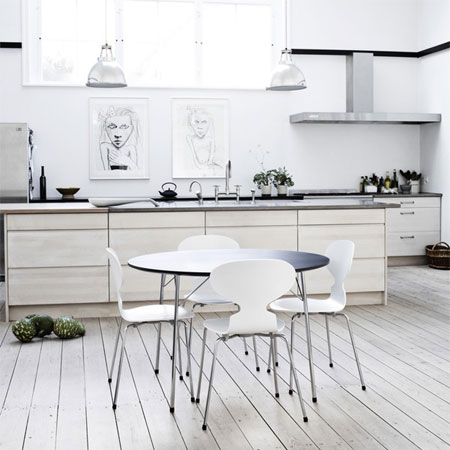 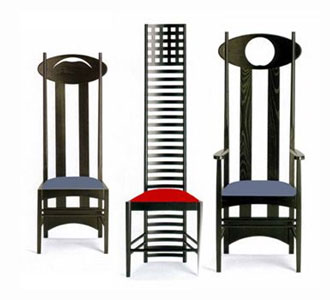 The Ladderback chair [centre], designed by Charles Rennie MackIntosh, is a design icon that has gained more popularity with this death than when he was alive. This iconic design still influences modern design pieces. The Argyle chair [far right] is another CRM design icon. 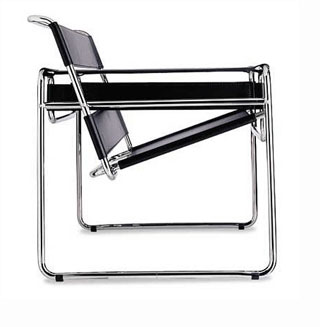 The Wassily Chair, also known as the Model B3 chair, was designed by Marcel Breuer in 1925-1926 while he was the head of the cabinet-making workshop at the Bauhaus in Germany.

The chair - later known as the "Wassily" - was first manufactured in the late 1920s under the name Model B3. It was available in both a folding and non-folding version. In this early version, the straps were made of fabric, pulled taut on the reverse side with the use of springs.

This chair was revolutionary in the use of the materials and methods of manufacturing. It is said that the handlebar of a bicycle inspired him to use steel tubing to build the chair, and it proved to be an appropriate material because it was available in quantity at that time. 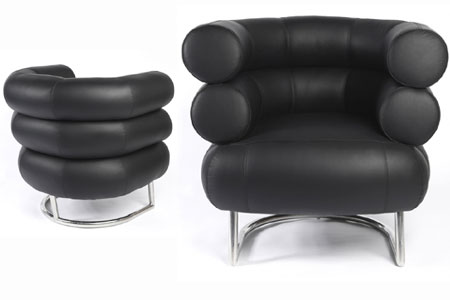 A true pioneer of the Modern Architecture Movement, Eileen Gray was an Irish furniture designer and by far the most influential women in her field with her work inspiring both Art Deco and Modernism for years to come. Gray was unique from other female designers of her time in that she did not partner with any other male designers. Her distinctive work, particularly the Bibendum armchair, represents the pinnacle of modern comfort and design and she is rightly regarded as one of the most influential designers of the 20th century! 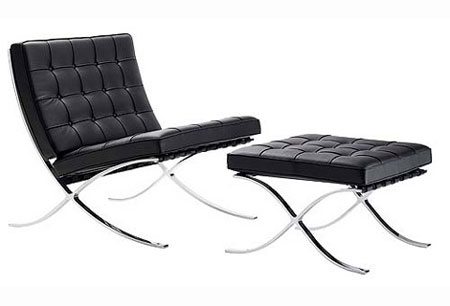 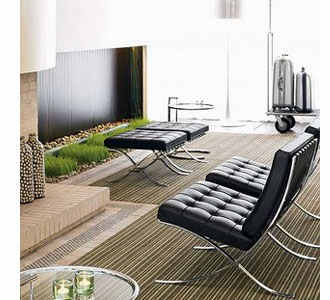 The Barcelona Chair, designed by Ludwig Mies van der Rohe, was first shown to the world at the International Exposition in 1929. Today, the chair continues to be an icon of great design, exuding class and elegance like no other piece of furniture. 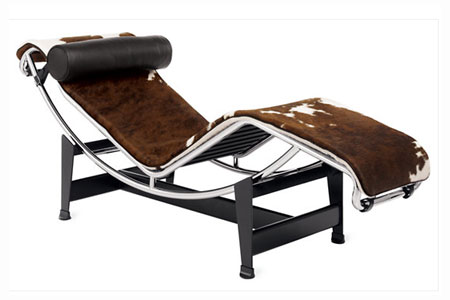 Charles-Édouard Jeanneret, better known as Le Corbusier, is one of the most recognised iconic designers of the 20th century. Designed in 1928, the LC4 chaise longue is the most iconic of Le Corbusier's designs and the only one on which he worked personally. He called it "resting machine".

It is most remarkable that the rest position can be adjusted without any mechanism - gravity will keep it in place. The authentic licensed chairs are still made in Italy by Cassina, who own the worldwide manufacturing rights. 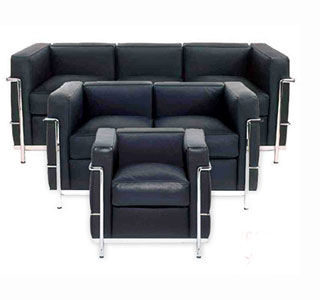 One of the most iconic pieces of furniture ever made, Le Corbusier's LC design is still manufactured today, and protected by an exclusive, worldwide rights license drawn up in 1964, when Le Corbusier was still alive. 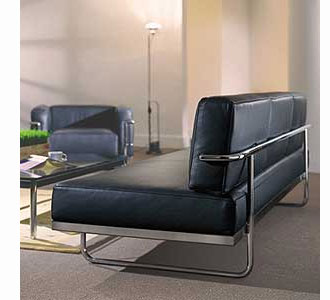 Still consider a modern piece. the LC range is manufactured today by Cassina. Each manufactured piece bears the signature of Le Corbusier and a production number. 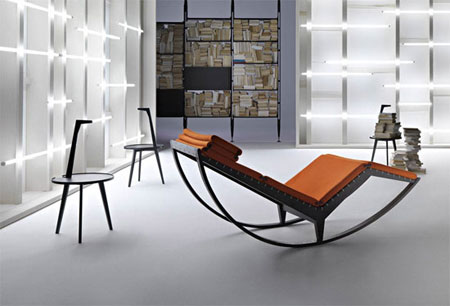 Through Franco Albini's creations, the modern furniture design merged the Italian traditional artisanship with the new forms of modernism. In his creations, he used raw, inexpensive materials. He exploited the very skilled Italian craftsmanship. This also meant an elegant design based on a minimalist aesthetic.

The Canapo rocking chair, manufactured under license by Cassina, is an innovative seating piece designed by Franco Albini. The cushioned fabric is attached with cords that form an architecturally graphic motif along the sides of the chair, making this classic design sleek, chic and timeless. 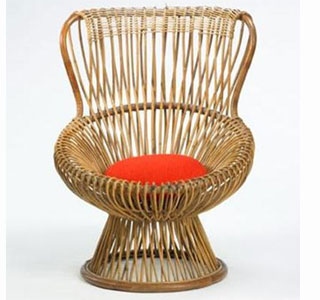 In 1950 Franco Albini designed the famous and fashionable Margherita chair - shown left - made of curved rattan and cane. All of Franco Albini's furniture designs follow the same practical design principle: simple and functional. 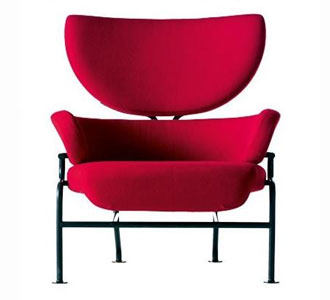 Franco Albini's most popular designs were done in the 1950s. The most famous ones were his designs for shelves and chairs, produced by Cassina and especially by Poggi. The Tre Pezzi armchair offers an modern re-interpretation of the classic bergère, from which it takes its shape.