Poor ventilation in a bathroom can lead to mould on a ceiling. We offer a quick tip on how to get rid of mould and paint over the stain. 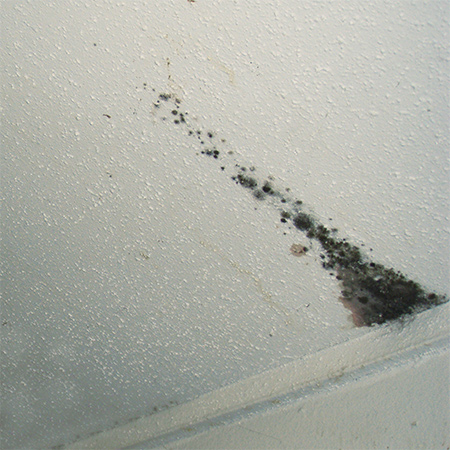 GOOD TO KNOW: When you notice mould in a bathroom - look for the source. While poor ventilation is the most obvious cause, also investigate possible leaks above the ceiling, or in walls.

When you notice mould on a ceiling, it's imperative that you treat this as quickly as possible. Under the right conditions - warmth and moisture - a mould colony can quickly spread and become a health hazard. It's also important that all the mould growth be treated to prevent reoccurrence.

If mould growth is already well established in a gypsum ceiling (plaster ceiling boards), you may need to remove and replace the affected portion of ceiling. Once mould is established, it is difficult to remove from porous materials.

When treating mould on a ceiling, open windows and doors to provide plenty of air circulation.

In a room with specialist wall treatments or crown moulding, cover these areas with tape and plastic drop cloths to protect

1. Scrape away any paint, especially flaking or peeing paint, to make sure you reach down to the source of the mould.

2. Household bleach is an effective mould killer on non-porous ceilings, but hydrogen peroxide is a safer alternative. Mix household bleach 1 part bleach to 5 parts water on pour into a spray bottle. Hydrogen peroxide can be sprayed directly onto the ceiling. If using tea tree oil, add 1 teaspoon of oil per cup of water, shake well and pour into a spray bottle.

3. Spray the solution directly onto the ceiling and leave for 10 minutes before lightly scrubbing. Repeatedly rinse the scrubbing brush as you work to prevent the risk of transfer to other areas.

GOOD TO KNOW: Hydrogen Peroxide is an anti-fungal and antibacterial, as is Tea Tree Oil. Both products can be used on fabrics.

Poor air circulation in a bathroom can lead to the establishment of a mould colony. If windows are too small or do not let in enough fresh air, look at the possibility of installing an extractor fan or place a dehumidifier in the room to reduce humidity.

After bathing or showering, keep the windows and bathroom door open for 30 minutes to allow air flow through the room.

Investigate the possibility of roof or water leaks and have these attended to immediately. 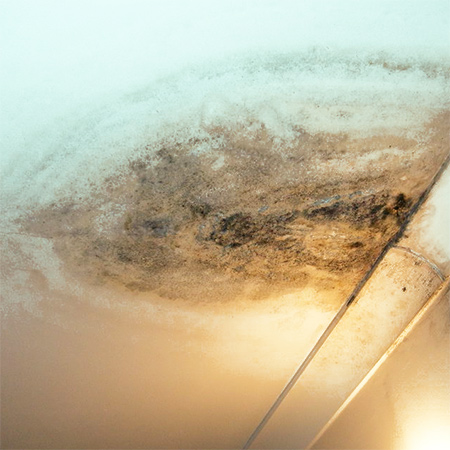 Application of a high-cover primer will block out stains. Paint once the ceiling is completely dry and apply 1 or 2 coats, allowing drying time between coats. Prominent Paints offer a variety of Primer and Paint solutions for any room in the home. Visit your local Prominent Paints store and ask for advice for your particular paint problem.