How safe is your home?

While aesthetics often take precedence when settling into a new home, it's important for homeowners and renters alike to complete a safety check of their abode to reduce the risk of unintentional injuries. One of the greatest hazards in a home that usually is the furthest from the mind is fire. But, it's one of the easiest to address.

Fire and burns remain a leading cause of unintentional injury and death for children, particularly those under the age of 5. You can't rely on your senses to detect a fire while you are sleeping - but a smoke alarm gives that vital early warning.

More than two-thirds of residential fire deaths occur in homes without smoke alarms or with non-working alarms. Fire experts recommend replacing alarms every 10 years as older smoke alarms may not operate efficiently and often cause nuisance alarms. As smoke alarms constantly monitor air 24 hours a day, after 10 years of use a unit has gone through over 3.5 million monitoring cycles, and components may become less reliable. This means that as the detector gets older, the potential of failing to detect a fire increases. Replacing them after 10 years reduces this possibility.

When replacing your home's alarms every 10 years, look for smoke alarms with a 10-year sealed lithium battery that will keep your alarms powered for a decade. The alarm will never need its battery replaced during its useful life. Or, select a combination smoke and carbon monoxide alarm, which offers a voice warning and uses the latest technology to help minimize nuisance alarms that often occur when cooking.

How do smoke alarms work

An ionization alarm detects particles in the air that are electrically charged, causing the alarm to sound once the level of particles reaches a determined quantity.

A photo electric alarm uses a beam of light to detect smoke particles and will sound an alarm when these particles reach a certain level.

The major difference between an ionization and photo electric smoke alarm is that the former detects smaller particles (fast fire) while the latter larger smoke particles. For this reason you may want to consider the installation of both types.

Heat detecting alarms are the best option for kitchens, where steam can accidentally set off an alarm from time to time.

How to install smoke alarms 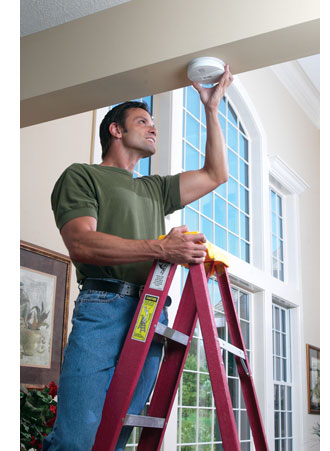 » When purchasing smoke alarms for a home, check that the product is certified or SABS approved.

» The best place to install smoke alarms is on the ceiling in all the rooms in a home, but most importantly in bedrooms and hallways.

» Regular clean smoke alarms with a feather duster or vacuum cleaner, as dust will affect performance.

» When an alarm starts to emit short "beeps" it's time to replace batteries.