Feel guilty when you're not green?

Green guilt is a new phenomenon. It doesn't affect devotees of SUVs, chlorine bleach, bottled water and paper napkins. Instead, it strikes consumers who are the most eco aware -- those who work hard to make smart environmental choices but sometimes slip, making decisions based on price or convenience instead of the welfare of the planet. 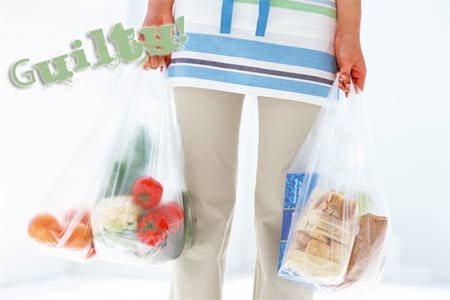 It happened again last night. In the midst of washing the dishes, a wave of green guilt washed over me. I had filled the sink with piping hot water and soap that was not phosphate-free, and rinsed some non-organic greens down the sink. The back door was open and the air conditioning was on.

I started to think about all of the eco sins I'd committed in the past hour, the past week, the past month -- about all the times I had used paper napkins at dinner, tossed an tin can in the trash and driven 10 blocks to a restaurant when I could have walked. Rather than focusing on all of the actions I do take in an attempt to be a good steward of the environment, I obsess over what I could be doing. It's called green guilt.

A Reader's Digest poll found that not recycling is the number one reason for green guilt. I feel the most guilt over wasting water and not composting. Even though I attempt to be responsible about water use and food waste, I know I could do more.

For me, the bouts of green guilt became more intense when I began specializing in writing about sustainable living. I used to write about fitness and nutrition, which led to pangs of guilt when I didn't spend 30 minutes on the treadmill or fell short of eating six servings of fruits and veggies a day. Now that I make a living talking about how important it is to go green, I feel even more pressure to walk the talk.

Think about it: It would be career suicide if Al Gore bought a Hummer or John Travolta added another plane to his already substantial fleet of aircraft. I might not be a former vice president with an Oscar-winning film or a famous actor but I still think it's important to practice what I preach. If I tell readers to steer clear of bottled water, I shouldn't have a case of Evian in the refrigerator -- it would be hypocritical to advocate for the use of canvas bags only to leave the supermarket toting a week's worth of groceries stuffed into plastic sacks.

I'll be the first to admit that green guilt has led me to make some questionable decisions: I have gone months without washing the dog beds (and the dogs) in an attempt to save water; I have carried an armload of loose purchases to the car because I forgot to bring canvas bags to the supermarket; and I have collected small loose bits of soap and tried to mould them into a single, bigger bar to avoid wasting the scraps.

Most of the time, I am the sole witness to these odd behaviours (a good thing or I might be writing this from a padded room) but there are times when I have embarrassed friends while on a green crusade.

My most embarrassing green moment happened when I was on a date. I put two empty beer bottles in my purse because I found out that the cantina where we met for drinks didn't recycle. I haven't returned to the cantina since that afternoon because I hate the green guilt that comes with knowing I'm supporting a business that doesn't care enough to recycle.

I realize that focusing on all of my little eco sins -- like the fact that I'm wearing a t-shirt that was manufactured in China from pesticide-laden cotton while eating a bowl of non-organic cherries that were imported from Chile -- is not productive. I must learn to let go of the guilt.

I'm going to continue using the cold water setting on the washing machine, choosing organic produce when it's an option, turning off the computer when I leave the house and steering clear of paper napkins and bottled water. When I feel those inevitable twinges of green guilt, I'll take a deep breath and let them pass.

[ Jodi Helmer - author of The Green Year: 365 Small Things You Can Do to Make a Big Difference. ]