How to deal with household emergencies

A household emergency can strike at unexpected moments and your response, or lack thereof, could determine how things come out in the end.

Most people think they know quite a lot, but most of what they have learned consists of myths that could actually do more harm than good. Put yourself to the test and seriously ask yourself: what would I do in these situations?

First and foremost, if the floor is damp or the wiring has gotten wet, it is dangerous to touch the main switch box. Have the electricity turned off by the municipality in the main meter box.

When turning off electricity, most fuse boxes or main circuit breaker boxes have main levers or switches where you can flip them to the Off position, it is that simple.

Never try to touch a shock victim who is still touching the source of the shock, the current can flow right through to you.

If you smell gas, open windows and shut off the main gas valve. Do not light a flame or turn any electrical switches on or off.

Do not use your phone.

Leave your house and report the leak from a neighbour’s house. LP gas is heavier than air and sinks to lower levels. If you can, go to the natural gas shut off and turn lever on the meter intake pipe so it’s perpendicular to the pipe.

If you have both propane and natural-gas appliances, here is an easy way to distinguish the smells. Sniff around, and if the smell is strongest below nose level, it’s propane. Natural gas is lighter and tends to spread through the air, heavier propane tends to settle closer to the floor.

A faint gas odour may signal that a pilot light is out on one of your appliances. in order to relight, set the control valve to off, then to pilot. Release gas to the pilot light by depressing either the red button or the handle, depending on the appliance model. Light with a match; then keep the button or handle depressed for at least one minute. Release it and set the control to On. 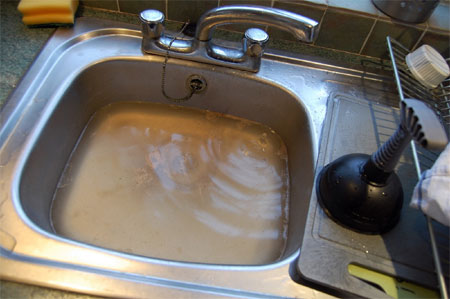 A strong smell of sewage from any fixture may indicate that the trap in the waste pipe leading away from the fixture has gone bad. Pour water into the drain and wait to see if the smell goes away. If it doesn’t, you may have more problems, so call a plumber.

If you have a flood in progress, minimise the damage with these do’s and don’ts:

Don’t give up on a piece of jewellery or other valuable items that go down the drain. Instead, use a pipe wrench to open the plug on the u- shaped trap under the sink or to remove the entire trap if there is no plug. Dump everything from the trap into a bucket, don rubber gloves and look for the item. 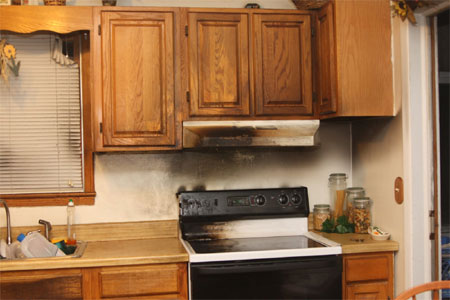 Oil that is left to overheat can easily become a blazing fire. Don't get into a panic. Turn off the heat on the cooker immediately and carefully cover the pan with a lid, plate or damp tea towel. Leave the cover in place for a least 15 to 20 minutes - removing the cover may reignite the flames.

Do not move the pan - It is not a good idea to rush out of the house with a blazing pot, as this could result in even more damage and could even cause a fire in your home.

Every home should have a small fire extinguisher on hand in the event of such emergencies. If you’re concerned of possible fires within your area, you may purchase a police scanner for emergencies as well.

In a home with old wiring, plug sockets and electrical outlets may short out as a result of electrical wires becoming brittle and breaking. Burning electrical wires have an obnoxious odour and it is recommended that you switch off the main switch and immediately call an electrician.

Forget everything you may have heard. The correct action is to rinse gently with cool water and coat the burn with antibiotic ointment. If the burn is on a sensitive area of the body such as the face or if there are a lot of blisters, then go to the ER and do not pop the blisters.

You also want to seek medical assistance if a burn completely circles a limb or is larger than your hand.

• Know the location of the main electrical circuit board.

• Locate the main water stop valve and make sure that it is accessible at all times.

• Have a handy list of emergency numbers for your area.

• Equip your home with a small fire extinguisher.