BACK TO HOME OFFICE

It's not always easy to find a suitable space to set up a home office, and that's why Jenny-Lee and her partner, Sean, turned an unused stoep into a functional home office. 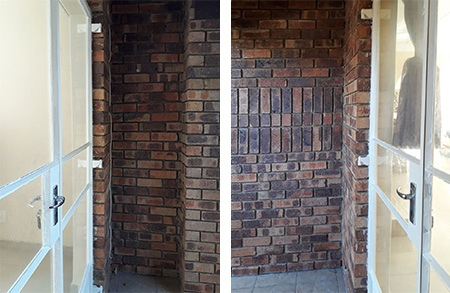 Jenny-Lee, who works from home, spent a year working from their dining room table. Her partner, Sean, had the very clever idea to turn the stoep off the lounge into an office and he used his annual leave to complete the transformation. This previously dead space is now functional and beautiful.

The couple have a face brick house, so the stoep had to be plastered. Prior to plastering, Sean did the electrical work and brought power into the area from the lounge. The existing French doors were removed and Sean built a custom aluminium framed sliding door to enclose the space. Sean had help with building the sliding door but it was necessary to employ a skilled plasterer to do the plaster work.

The addition of the glass sliding door created also the illusion of bigger space. 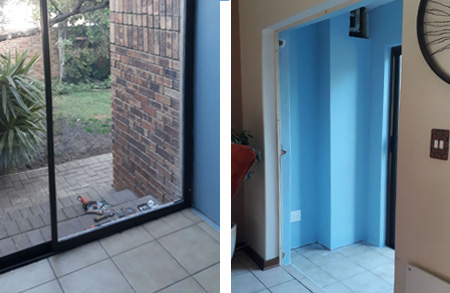 After fitting the glass, ensuring it was water-tight, and finishing off the plaster, Sean started with the painting. Builders Warehouse undercoat was applied on the plaster finish with two coats of paint over the top of this. Jenny-Lee says that they also used the undercoat on the ceiling too. Using a piece of fabric as the inspiration for the room, Atlantic Tide was applied to the walls.

Once the room was plastered and painted, Sean started with building the desks and wall shelves. The space was much smaller than originally anticipated, so they had to plan well to make sure it was all very functional as well as aesthetically pleasing. The desk was on one wall and another smaller desk was built on the wall opposite. Sean purchased sheets of board from Builders Warehouse and had them cut it into manageable sizes at the store. He then worked in his garage to turn those pieces into what was needed to make desks and shelves. 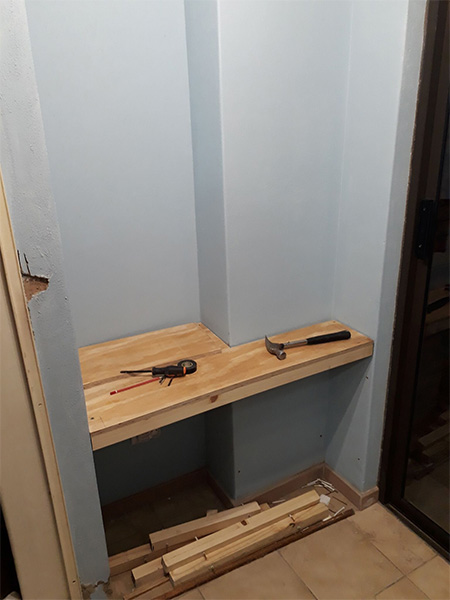 ABOVE and BELOW: Assorted pieces cut to size to assemble the built-in desks. 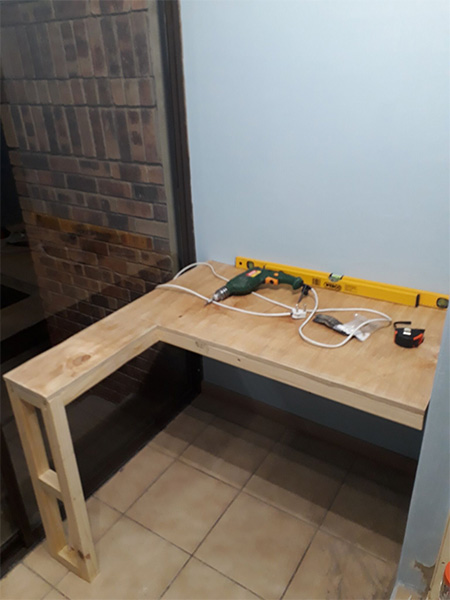 The room needed plenty of light for use as a home office and they bought a light fitting with four adjustable spotlights. 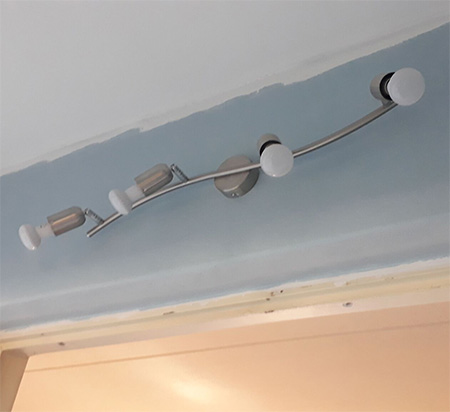 To add a finishing touch to the new room, cornice, skirting and a beautiful sconce for the roof were purchased and installed by Sean. 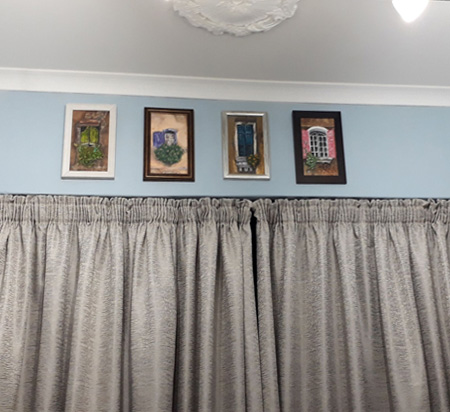 Jenny-Lee found curtains at Mr Price Home that matched the colour scheme in the room and Sean installed a curtain rail over the window that allowed the curtains to hang from the top part of sliding door (making them flush with the wall). This allowed for extra space above the window/door for Jenny-Lee to add some artwork for a personal touch. The method used for hanging the curtains also meant that they didn’t protrude too far from the glass door - allowing for the desk to be slightly larger. 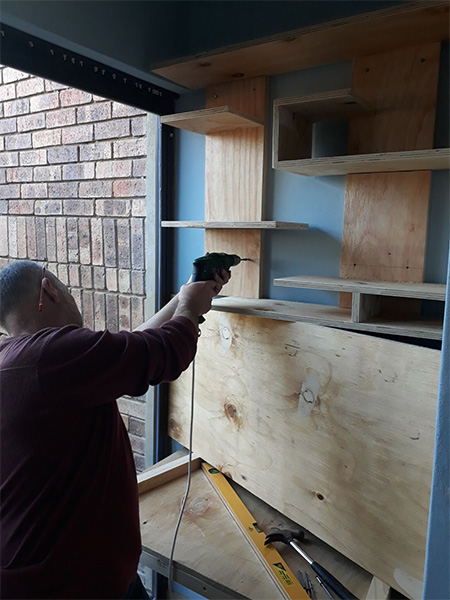 Then it was time to install all the shelves. Jenny-Lee wanted to have floating shelves for all her home office necessities, but Sean wanted to make sure they were secure too and devised a system to mount the shelves onto a panel that was attached to the wall in two places. This gave the shelf arrangement an interesting configuration that would still service the needs of an office, but also be aesthetically pleasing, since the new home office is also a part of the house.

For the larger desk a shelf was built to house the printer and also designed to hide cables. The arm on the left on the desk makes it a very comfortable space to sit and work. 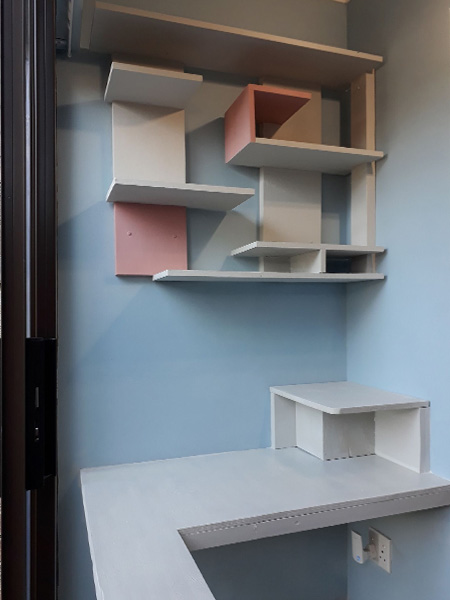 Once installed it was time to paint the shelves. Granny B’s chalk paint in Strawberry Cupcake was used as an accent colour and Mushroom for the shelving.

The smaller of the two desks has a custom built shelf for a computer screen. The shelf also hides away all the cables. Smaller shelves were installed underneath the desk to take advantage of all the available space. 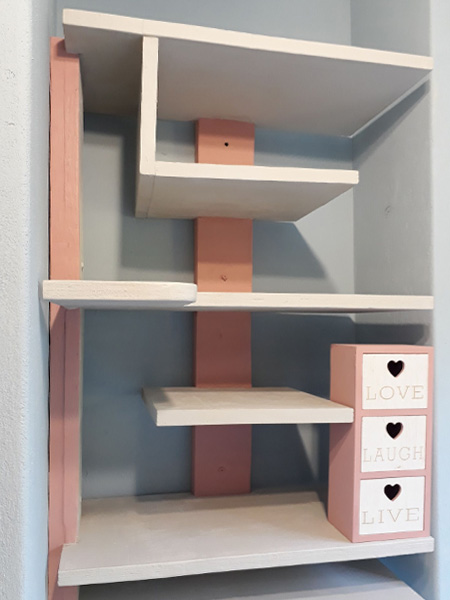 All in all a very successful project. After three weeks of leave the office was completed and Jenny-Lee could move in. The job cost around R12 000 as a DIY project and they couldn’t be more thrilled with the outcome. The challenge with this project was to turn a 3.5 m2 useless space into a fully functional area that could house two desks and be a fully functional office. 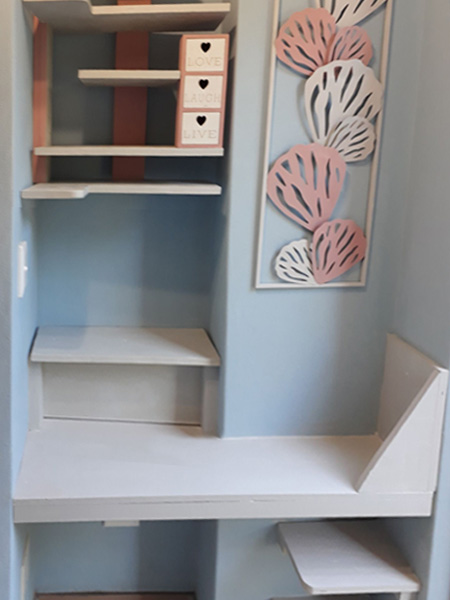